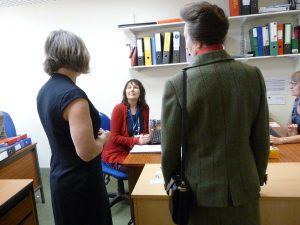 HRH the Princess Royal visited Totnes on Monday to help Citizens Advice celebrate its
80th anniversary this year. As she toured the charity’s Follaton offices with CEO Janie
Moor the Princess talked to some of the volunteers and staff that work for the local
charity. She then presented three long service awards to: Vivienne Oxley who started
working for Citizens Advice 20 years ago as a volunteer adviser and who is now a
member of staff advising clients on debt and energy matters; Anna Brownlow who has
just retired as a Trustee after 20 years’ service; and Lesley Crooks who has been looking
after the finances of the charity for an incredible 25 years, having joined as a volunteer
in 1993.

Civic and Town dignitaries from Totnes, Dartmouth, Ivybridge, Kingsbridge and
Salcombe were also there to represent the towns and parishes of the South Hams. Also
helping the charity celebrate were other local organizations that Citizens Advice works
with closely, such as Dartmouth United Charities, The Tenancy Deposit Scheme
Charitable Foundation, Totnes Rotary, Totnes Caring and Kingsbridge Foodbank.

Janie Moor, CEO of Citizens Advice South Hams said, “The Princess is the Patron of the
National Association of Citizens Advice Bureaux and she chose our office to visit
because of the hard work we do in the local community. It was lovely to be recognised,
and I’d like to thank everyone who attended for supporting us. Our office is very busy
and we are taking more and more calls and drop-ins from clients. If anyone finds they
can’t get through to us on the phone and they have access to a computer I’d like to
signpost them to southhamscab.org.uk where you can type your problem into the
search box and move around our advice website. If you can’t find the answer to your
problem then please ring or pop into our offices”.

Whilst visiting the Citizens Advice offices Princess Anne presented Lesley Crooks with an
award recognising her 25 years of service for the local charity.

During her quarter century at the charity, Lesley has worked for six different managers
and, as its accounts supremo, has helped secure its financial future, not least when its
four previous local offices merged into one.

“Lesley is tenacious, hardworking and has a wicked sense of humour,” Janie Moor,
Citizens Advice South Hams, CEO, told the princess, local dignitaries and the charities
volunteers and staff.

The Dartington resident came to the charity after a career in the private sector. She says
that moving into the charity world was the best thing that happened in her working life
and that she would recommend Citizens Advice to anybody.

“Citizens Advice gave me back my confidence and self-esteem,” says Lesley who joined
after being made redundant and now does a mixture of paid and voluntary work. “The
help and support Citizens Advice gives to people is so important. It’s extraordinary.
That’s why I’m still here.”

If Lesley’s’ face seems familiar, that’s because she is also a longstanding participant in
Totnes’Elizabethan Market which runs every Tuesday in the summer months. Her
homemade jam and marmalade and plants have helped to raise “well over £30,000” for
the Chernobyl Children’s Project which supports families affected by the aftermath of
the 1986 nuclear accident.

“My heart is with helping the children,” says the mother of two.

At a time of life when most of her peers are well into their retirement, Lesley remains as
keen as ever to serve her community.

“I do love working here. I look forward to getting up and coming in,” she says. “Citizens
Advice feels like a family. You wouldn’t ever want to let them down.” 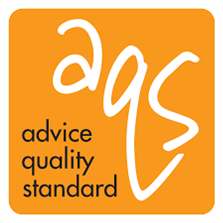